Max Weiler would have  celebrated his 100. birthday on 27. August 2010. The painter spent his life focused entirely on his art, producing approximately 7,000 works in over 70 years. His public work with frescoes, wall paintings and mosaics are renowned around the world, and his large-format picture cycles such as "Als alle Dinge" and "Wie eine Landschaft" are modernist classics.

This documentary investigates the life and works of the artist, who achieved fame over night by allegedly defaming farmers with his wall paintings for Innsbruck's Theresienkirche. 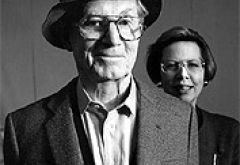