The Green River from the Alps

A glacial stream and a lake high in the mountains, a mighty waterfall crashing into a valley, a series of lakes at the foot of 3000-metre high mountains, a wild river forcing its way through rocky canyons, expanses of gravel banks and small islands, wetlands and floodplain forests - the Inn river has many faces, and many stories to tell.

At 520 kilometres, the river is the longest tributary of the Danube in Central Europe and flows through Switzerland, Austria and Bavaria. The plant and animal life along the Inn is as diverse as the landscapes that the river passes through: large numbers of graylings and trout populate the upper reaches, little ringed plovers breed on the gravel banks, dragonflies, frogs and rare aquatic plants can be found in the backwaters, and owls and bats raise their young along the water's edge. The lower reaches are home to beavers, otters, night herons, shelducks, goosanders and dozens of other bird species.

One of the most fascinating aspects of the Inn is its continued strength and power: despite several power plants and barrage dams, the river transports more than 1 million tons of sediment a month during the summer. Near Passau, the Inn flows into the Danube and ceases to exist. 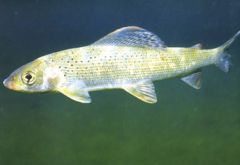