The birth of Europe's first naturally conceived baby panda on Thursday, 23.08.2007, in Vienna's Schönbrunn Zoo, was a cause for celebration. The arrival of the pink, squeaking cub even made a splash in China's newspapers and on television, and the bear was given the name "Fu Long", or "Happy Dragon". This momentous event had to be documented, and the young bear became the star of the ORF and Universum series "Panda TV", produced by Interspot Film. The director Heinz Leger and an Interspot camera team followed the panda's development from the first day on. Special cameras recorded the first, tentative squeaks to emerge from the birthing box, the team documented the first time the bear opened his eyes, and, finally, after months of waiting, his first steps. 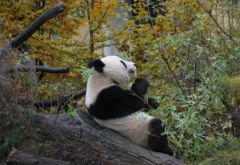