PART 1: TYROLEAN WONDERLAND: THE REALM OF THE PEREGRINE FALCON

The film „The Realm of the Peregrine Falcon“ is a classic nature documentary, presenting stunning natural scenery and the fascinating lives of wild animals over the course of a year.

Seefeld lies at the heart of Tyrol, surrounded by the wildest, most beautiful peaks of the Alps. The limestone mountains rose from the sea millions of years ago, and wind and rain have eroded them ever since. New habitats appear and disappear, creating new relationships among their inhabitants. This diversity and transformation is what makes this region unique, incomparable - and fascinating.

Ibex rule the peaks. In winter, the mating rituals of the powerful animals are a breath-taking spectacle. Above the ibex: choughs, golden eagles and the fastest aerial hunter of them all: the peregrine falcon. The mountain pastures are nurseries for marmots and chamois.

The wildlife documentary reveals a unique, diverse world found nowhere else in the Alps.

The second episode, "Olympic Region Seefeld - Between Tyrol and Bavaria", takes a detailed look at the history of the Seefeld plateau and examines how the town of Seefeld went from a relatively insignificant spot along an important traffic route to the world-renowned tourist destination and Olympic venue it is today. In some ways the film is a celebration of the region's inhabitants, who have made the inhospitable plateau their home and turned it into a welcoming, popular place for sport and nature enthusiasts from all over the world. In addition, "Olympic Region Seefeld" explores how relationships between Tyrol and Bavaria have influenced life on the Seefeld plateau over the centuries, and the impact they continue to have.

A Co-Production of Interspot Film, ORF, BR and BMBWF for ORF Universum. Funded by Fernsehfonds Austria and CineTirol. Distributed by ORF Enterprise. 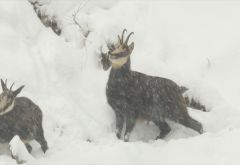