Universum Operation Stonehenge - What Lies Beneath

Production Overview
Operation Stonehenge: What Lies Beneath exclusively reveals the results of a five-year project which has used revolutionary new technology to map the whole area around the site. Drawing on that new data, this mini-series, alongside state-of-the art CGI and dramatic reconstructions, is providing the most complete picture ever of Stonehenge and the prehistoric culture that flourished around it.

With state of the art survey equipment the Hidden Landscape Project has managed to ‘peel away’ the surface of around 14 square kilometers around the site, and show how seemingly empty fields contain a myriad of hidden structures.

The new data gathered by the scientists has allowed them to create a unique multi-layered digital map which reveals more than a hundred “lost” monuments, shrines and buildings. They provided exciting fresh evidence about why and how the site grew and developed from its earliest prototype into its current form; how the large stones were transported to the iconic circle and how and where the people who built Stonehenge over centuries lived. 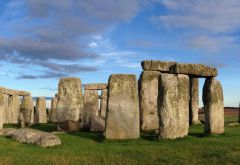