Known to children and adults across the globe, Richard the Lionheart is one of history‘s great mythical figures. A legend in his own lifetime, he enjoyed a reputation that he cleverly fuelled himself. His story is intertwined with that of King Arthur, whose sword Excalibur he wore. Even restrained, matter-of-fact chronicles tell of a heroic life that began 850 years ago and ended tragically, when the king, in the prime of his life, wore the wrong clothes at the wrong time in the wrong place.

Richard was a warrior, a regent and – sometimes – a violent killer. Physically imposing, over six feet tall, the king had flaming red hair and a beard to match – as well as a passion for poetry and music. He was a brave fighter, known for throwing himself into battle with little consideration for his own safety or the consequences of his actions. Richard inherited a fragile kingdom with an uncertain future. And at a time, when the European dynasties were engaged in a struggle for power, he was one of the most influential rulers.

And yet somehow this mighty king allowed himself to become trapped: In one of history‘s most spectacular kidnappings, Richard the Lionheart was taken hostage as the result of a plot devised by several European rulers to remove a powerful rival.

More than 800 years ago, Richard the Lionheart and his greatest adversary, Philip II, the King of France, embarked on a crusade together. While their families battled against each other for dominance on the European continent, Richard and Philip were fighting abreast against Saladin in the holy land.

After the conquest of Acre (Akko), Philip returned to Europe, while Richard kept fighting, willing to capture Jerusalem. As soon as the French king was back in Europe, he began to plot against Richard and soon found a number of co-conspirators.

After he had reached an armistice and a permanent peace treaty with Saladin in Jerusalem, Richard planned his return to England, but suddenly he realized that all homeward routes were blocked.

Richard had angered so many rulers across Europe that even his status as a returning crusader offered no protection. An intrigue was plotted, of a degree never seen before – including all of the mighty European dynasties. Even his own brother was involved!

In 1192, near Vienna, Richard was finally kidnapped by the soldiers of Leopold V, Duke of Austria.
But how did the kidnapping occur? Who was conspiring against Richard, pursuing which goals? How was it possible that a successful crusader, protected by the church, was held captive for more than a year? And how did Richard manage to be released, using his diplomatic and strategic skills?

To this day, historians continue to debate the full extent and the correct interpretation of this widespread intrigue. But one thing is clear: the plot changed the balance of power in Europe significantly.

How did the myth of Richard the Lionheart become so firmly established, from the tale of the minstrel Blondel to the legend of Robin Hood? Richard the Lionheart reigned for just ten years, but he represented all the ideals of knighthood. Over the centuries, his reputation grew to that of a mythical ruler. And who was the person behind the legend of the king with the heart of a lion?

The thrilling documentary „The Trapped King“ explores the many questions and secrets that surround Richard the Lionheart and this international intrigue against him through interviews with renowned experts – and paints an insightful picture of the legendary king using high-quality re-enactments. 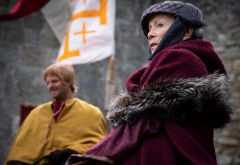