Universum History 1278 - The Battle for Europe

Production Overview
A Quest for Power
On 26. August 1278, one of medieval Europe's greatest battles puts an end to a long-running conflict between two powerful dynasties and determines who will dominate Europe in the centuries to come. It is a battle between the forces of Rudolf I of the Habsburgs and the army led by Ottokar II of the Přemyslid dynasty, between the King of the Germans and the King of Bohemia, between the candidate of compromise against the continent's most powerful ruler.
The victor of this battle establishes the foundations for the unparalleled rise of a dynasty that will determine the course of Europe for the next 640 years and rule one of history's greatest empires: the Habsburgs.

A New Approach to Old Questions
The docu-drama traces Rudolf's rise to power at the original locations. The documentary examines the events of the time from many different perspectives. Internationally renowned experts including Dr. Wolfgang Neubauer from Vienna's Ludwig Boltzmann Institute use modern scientific methods to create a fascinating evaluation of the battle and place the events of the time within the wider context of the European politics of the High Middle Ages. The film focuses on Rudolf´s rivalry with King Ottokar of Bohemia and his rise from potentate of the lands between the Rhine, the Black Forest and Lake Constance to ruler of the Christians.

A Co-Production of ORF, CT, ZDF and Interspot Film in Association with ARTE, funded by Fernsehfonds Austria, Land Niederösterreich and VAM, distributed by ORF Enterprise. 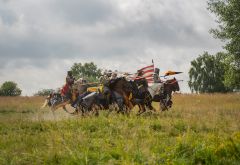