Octavian, better known by his honorific title of Augustus, was the heir to the murdered autocrat Caesar. He avenged his adoptive father, pursued his murderers, expropriated and exterminated them, and used cunning and brutal violence to bring the civil war to an end in order to become ruler of the Empire himself. As Octavian, he disregarded and broke all the laws of the Republic. As Augustus, however, he wrote in his testament that he restored the Republic in 27 BCE. Behind the facade of the “restored” Republic and under the title of Princeps he established an autocratic emperorship.

Yet, he also secured peace, which is known as the Pax Augusta. Who would be his successor as Emperor once the Republic had effectively come to an end? Two women fought for themselves and their children: Julia, the daughter of Augustus, and his third wife Livia Drusilla. Eventually, Livia prevailed, becoming co-Empress, and her son Tiberius followed Augustus. The power struggle had it all - intrigue, conspiracy and even murders – but Augustus made the Roman Empire fit for the future. His reforms led it out of the turmoil of the civil war and ensured that Roman culture was able to blossom for centuries.

A Co-Production of Interspot Film and Gruppe 5 for ORF, ZDF in association with ARTE, funded by Austrian Television Funds, Kultur Niederösterreich, distributed by ORF Enterprise. 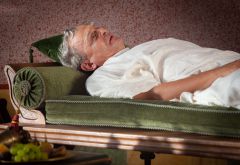