The film highlights the diversity of the province in the form of magnificent images and presents unknown natural treasures before such famous backdrops as the Großvenediger or Hochkönig mountains. Also presented are animal species which have managed to return to their original habitat on their own as well as those who have had a helping hand from humans, as for example the bearded vulture and the ibex.

The film shows characteristic behavioural patterns of a number of species and points out in a humoristic manner the potential conflicts which can result from the co-existence of man and wild animal.

The film is a mixture of pure wildlife observations with a long focal length and almost intimate stories about wild animals which have generally become accustomed to human beings.


A Coproduction of Interspot Film and ORF Universum, funded by Fernsehfonds Austria and Land Salzburg, in cooperation with Wagrain Kleinarl. 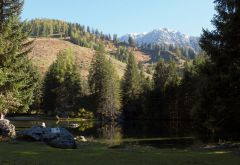