It is a country defined by its borders, and it is these borders that are at the centre of a new, feature-film-length Universum documentary.

Gernot Lechner's film "Austria's Borders" explores the most spectacular areas located along Austria's boundaries, areas which are simultaneously among the most beautiful landscapes in Central Europe.

Austria's border is exactly 2,709 kilometres long, tying together the nine provinces and also connecting the country with its neighbours and with the rest of Europe. The documentary is an expedition with several fascinating encounters, and it is not always entirely clear where Austria begins or ends.

Wars and peace treaties have defined the course Austria's borders are to take. When the Iron Curtain came down, the border sections that had often been fatal for those trying to cross them were transformed into conservation areas, an important part of the so-called "Green Belt" that connects northern Europe with the Mediterranean and also provides wild animals with an important north-south connection.

During his journey, Gernot Lercher visits eight of the nine provinces - Vienna has no international border. The Universum documentary does not simply follow the course of the border, preferring to take a look across to the neighbouring countries and thereby uncover both similarities and differences. A strange borderland of unknown places is revealed, where exciting and moving encounters with animals and humans occur.

The viewer accompanies shepherds and their herds on their life-threatening journey across the Alps from South to North Tyrol, following the same path that Ötzi took 4000 years ago. Unlike Ötzi, they reach their destination safely.

The film investigates abandoned barracks along the Hungarian-Austrian border, where opposing worlds once met. Today, barbed wire and walls lie overgrown, pushed aside by the roots that have grown through them. Nature is in control here, and the only hunters who remain are animals like the wolf spider.

The Iron Curtain has been consigned to history, although some borders may remain in our minds. Animals are far more forgiving. When an elk pokes its head across the border of the Czech Republic or a Slovenian bear develops an appetite for Austrian honey, it is no more than a sign that wildlife diversity is still present in the 21. century, and that Europe's animal predators are not completely extinct. A Europe without borders also benefits these creatures.

Human travel is now far easier, and long queues at borders while documents are checked are a thing of the past - even at Austria's busiest border crossing Kufstein, where up to 50,000 cars a day cross from Germany into Austria or vice versa. The heavy traffic has little effect on the beaver building a dam, as it lives in a parallel world.

It is hard to imagine that the picturesque rolling hills and vineyards of southern Styria were a heavily guarded border with Yugoslavia during the Cold War. The film recalls those times, as well as the First World War battles in the mountains of the south that cost many lives. In the Carnic Alps, on the border between Austria and Italy, abandoned military posts remain as memorials and as a warning. Intrepid climbers make their way there over the steep cliff faces of the  Plöcken Pass.

From the Bavarian dairymaids on Salzburg's Kallbrunnalm Mountain to the aristocratic family in Hardegg, Austria's oldest stretch of border, from the Alpine ibex in the mountainous Montafon region near the boundary with Switzerland to the chamois on the Kapuzinerberg mountain in Salzburg's border region: any person who investigates the humans and animals along Austria's edges soon realises the absurdity of trying to withdraw from the outside world. Borders need not be dividing lines, they can also be sources of strength and inspiration.

The only fisherwoman on Austria's Bodensee lake has probably always known this. The lake is shared between Germany, Switzerland and Austria, and has no borders. Anyone disembarking from a boat or ship has to figure out which of the three countries he or she is now in. This is unique in Europe, and the fisherwoman's life is one of freedom without boundaries.

80 days of filming went into the Universum documentary "Austria's Borders", and Gernot Lercher and his camera team travelled more than 60,000 kilometres to uncover the most beautiful and fascinating elements of Austria's boundaries. 25 hours in a helicopter ensured spectacular aerial footage of a country that seems small only at first glance.

Closer investigation from all sides reveals the true grandeur of the country, from its natural and animal world to its history and humanity.

A film by Gernot Lercher, produced by ORF and Interspot Film with the support of RTR and BMBF. 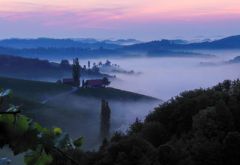