Most species In the world’s oldest and driest desert are specialists that have adapted to these harsh conditions over tens of thousands of years: oryx, ostrich and hyenas. Yet the wild horses of the Namib were imported from Europe just over a hundred years ago.
Some were the pack animals of the German colony’s diamond prospectors, others were brought in by opposing armies when war broke out in 1914. In 1918 they were released, unwanted, into a desert of abandoned ghost towns - the horses of Africa’s Wild West.
Here they still live, in spite of drought, heat and constant sandstorms, and the nightly attacks of hyenas. In fact they owe their survival to the colonists. When diamonds were discovered the colonists created the Sperrgebiet, a Forbidden Zone 300 km long and 100km wide, that incidentally protected the region’s wildlife from all human interference. And they had built a single well, to supply the railway from the coast to the mountains of the interior.
Today the horses must stay within 40 kilometers of the well at Garub to survive. Unlike their neighbors the oryx antelopes, they can’t regulate their body temperature in 50-degree heat or wander off for weeks, slowly using up the water they store internally. But the few grazing grounds the horses can reach are quickly laid bare, turning their lives into a never-ending trek -- tracing, like spokes on a wheel, long trails from the central round pond into the burning desert. The grass can only be replenished by the rains, often months late, sometimes never coming at all. 150 horses regularly dwindle to just 100; if numbers fall below 50 they are doomed.
And that would be a tragedy, as they have developed remarkable social cohesion in their isolation and determination to survive. Sniffing each other’s dung encourages social bonding and can tell herd members whether a lead stallion still has the energy to dominate his small group – or whether another has found good grazing grounds on their last foray into the wilderness. As the summer drought worsens, the horses will eat their dung, the last source of vital minerals in the parched landscape. Attacked by hyenas overnight, they will tenderly lick each other’s wounds to speed the healing process.
Every year, as foals are born after an 11 month gestation, the mares immediately gather round to protect them from the hyenas that now attack even in broad daylight. The undernourished mares can barely feed their foals. The young and old are equally vulnerable; the herd waits for no-one and stragglers are easy pickings. In one heartbreaking sequence a mare and stallion abandon their exhausted foal and then return to stand guard as he tries to reach up to suckle. In another, an elderly mare enjoys a last dust bath, struggling painfully to her feet to pursue the horses disappearing over the horizon. And there’s a scene of pure joy when the rains finally come and the magnificent horses splash and frolic in the mud-baths that gather in sandy hollws.
If the trials and triumphs of the Namib horses in the toughest of years are the spectacular and moving lead story of this film, then the landscape itself is the hidden hero, in its infinite shapes, shades, textures and striking shadows. Between the parched interior and the sea, this landscape transports life to the smaller creatures of the desert. A dune beetle condenses on its back the wisps of mist that float in from the Atlantic – and becomes a precious drink-and-snack for chameleons, sand vipers and lizards colonizing the prospectors’ abandoned ghost towns.
A mother jackal raises her cubs in a pipeline in a deserted coastal mining settlement, and wanders across to Atlantic beaches where thousands of seals give birth to their young. The jackals once feasted only on the afterbirth of the newborn, but now – no-one knows why - they attack the seal babies themselves. But they lack the skills to dispatch their prey quickly; and, shockingly, the seal mothers themselves don’t yet seem to recognize the deadly danger to their offspring.
The last and biggest biggest surprise of the Sperrgebiet is just 200 meters offshore, on tiny Halifax Island, home to a flourishing colony of spectacled penguins. They know nothing of the carnage and life struggles of the horses, seals, jackals and hyenas on the mainland. The biggest drama in their lives comes in March, when a penguin couple must lay a nest of seaweed as a comfortable bed for their future young. It seems that when there are neither dangers nor shortages, solidarity goes to the wall. All you need to do is steal the seaweed your neighbor spent so long collecting!
It’s hilarious - but there’s a profound message there somewhere…

A Production of Interspot Film for ORF Universum in cooperation with NDR Naturfilm doclights and Arte. 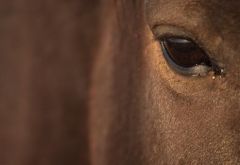