Tomb of a Dynasty

Production Overview
The Imperial Burial Vault of the Habsburgs in Vienna

The first TV documentary ever to cover the Imperial Burial Vault in Vienna, certainly one of the most singular and
thrilling tombs found in the world. Twelve Habsburg emperors are buried here, surrounded by 135 high-ranking members of the imperial dynasty of Austria, among them Empress Marie Louise, wife of Napoleon, and Emperor Maximilian of Mexico.

The Habsburg family tomb, lying below the Capuchin Church in the inner city of Vienna, was founded in the early 17th century and added to by each subsequent generation of Habsburgs. Venturing into the tomb filled with the mortal remains of 15 generations of Habsburgs opens up a remarkable vista of history. 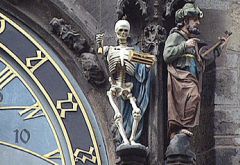