The Wild One- Special

On the brink of his retirement, Helmut Pechlaner, Director of Schönbrunn Zoo, takes one last tour of his animal kingdom, accompanied by a TV crew shooting a special UNIVERSUM episode. In 15 years, the icon of Austrian wildlife programmes has remodelled the world's oldest zoo and turned it into one of the most modern facilities.

Helmut Pechlaner's first stop is with the pandas: after the great stir caused by the big animals' love life reverberating across the entire zoo last spring, is Panda Lady Yang Yang pregnant at last? And how does baby elephant Abu fare in his new home in Germany? Apart from such highlights, the documentary gives due attention to the daily routines performed by the vets and carers.

The UNIVERSUM episode also evokes an unknown or rather half-forgotten man: Helmut Pechlaner, slim, athletic and sporting a full beard, in his first appearances at ORF nature documentaries. 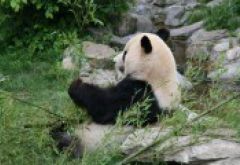