The Assault - Terror at the Airport

The assault on the airport placed Austria's Middle East policy front and centre in public discussion. Many questioned whether the positions of Austria's chancellor at the time, Bruno Kreisky, had brought terrorism to Austria. Five terrorist attacks with Palestinian involvement took place between 1973 and 1985. It was a decade in which Austria was heavily involved in the politics of the region, acting as negotiator and opening political doors, particularly for Yassir Arafat's PLO, which was internationally condemned as a terrorist organisation until the end of the 1970s.

For the first time, this documentary examines the secret background of the airport assault of 1985. 25 years after the dreadful events of that day, a race against terrorism is revealed.

Produced with the support of Fernsehfonds Austria and Filmfonds Vienna. A coproduction of Interspot Film and ORF. 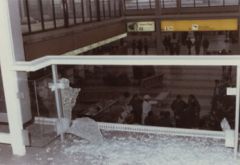