Straight from the chef's mouth 2007

Production Overview
Ever since Jamie Oliver swept the cooking show format into the modern age, each country has established a major format of its own that moulds the culinary preferences of its audience nation. In Austria, this outstanding status was obtained by "Frisch gekocht ist halb gewonnen" in 1999. The concept is singular: top chefs from the country's best restaurants whip up their current top dishes on a daily basis. They are assisted by hobby chefs who show off their very own creations. The audience votes by telephone and the overall winner is crowned Austrian champion chef of the year.

One pointer of the format's success: more than 1,100 episodes have been produced since 1999.

The great cooking contest "Frisch gekocht ist halb gewonnen" is now in its seventh series. At 1:15 pm from Mondays to Fridays, ORF 2 offers a stage to compete for the "champion chef of the year 2006".

Helped by presenter Peter Tichatschek, a multi-hatted chef from one of Austria's nine states whisks up menus for three weeks in a row, side by side with a candidate from the same state. 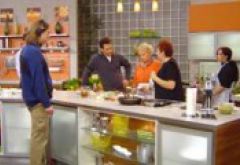