For one and a half millennia, the monasteries at the foot of the holy Song Shan mountain in China have been perfecting the high art of Kung Fu. It was here that Zen Buddhism was established, and here that all martial arts are rooted.

But the championship of Kung Fu has never been limited to the monks of the Shaolin temple - women are also admitted to the art. In Yongtai Nunnery, founded by a princess who had converted to Buddhism, more and more girls and women are practising Kung Fu with and without weapons, and the skills of Qi Gong, in which they have already ascended to the highest virtuosity.

The nunnery has for the first time in its history opened its door to a camera team, offering a glimpse of the training and skills of the Kung Fu nuns of China.

The documentary concentrates on six female champions of Shaolin Kung Fu living inside and out of the nunnery, their hard training schedule and their accomplished exercises. We see Tai Qi, Qi Gong and Kung Fu raised to supreme perfection, in aesthetic harmony with the enchanted land and captivating architecture of an ancient Chinese cultural heritage site. 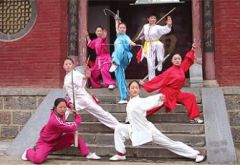