Ladies and Gentlemen, Ham and Eggs

Michael Kehlmann counts among the outstanding directors in German-language television. He was an early pioneer who recognised the opportunities offered by the new medium and was instrumental in shaping the development of the television drama for 40 years. Some of his works wrote TV history: his film of the novel “Der Radetzkymarsch" is legendary, and he introduced Austrian authors such as Joseph Roth or Ödön von Horváth to the world.

But his chief quality was his firm belief in the educational quality of television which he consistently pursued in more than a hundred TV dramas.

The documentary draws a highly personal portrait of the director, consisting of clips from films and plays, interviews, photographs and backstage material, offering friends and associates of Michael Kehlmann a platform to remember the man and his work. 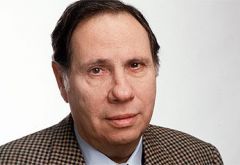