Hansi Hinterseer has enjoyed a varied career as a professional skier, a singer, an actor and a TV presenter. His moving life story is an incomparable tale of success. To celebrate both his 60. birthday on 2. February 2014 and 20 years on stage, the ORF and its partners broadcast a comprehensive portrait of the internationally renowned Austrian star.

The film covers his early years as the son of a mountain farmer on Tyrol's Seidlalm, where there was no electricity at the time, as well as the beginning of his sporting career, his incredible successes in international skiing championships and on the US professional circuit, and his unbelievable career as a popular international music star. The entertaining documentary also includes previously unreleased video footage which provides some insight into the well-guarded private life of Hansi Hinterseer.

As well as Hinterseer himself, the film includes interviews with numerous friends, fans and prominent contemporaries from the sport and entertainment worlds. Franz Klammer, Marcel Hirscher, Bernhard Russi, Franz Beckenbauer, Niki Lauda, Andrea Berg, DJ Ötzi, Karl Moik, music manager Thomas M. Stein, Rosi Mittermaier and Christian Neureuther, Anja Kruse, Maximilian Schell and many more share their stories about Hansi Hinterseer and their experiences with him. In emotional sequences and together with his companions, Hinterseer looks back gratefully at the last 60 years.

An impressive 836,000 viewers tuned in the show when it was first broadcast in Austria. 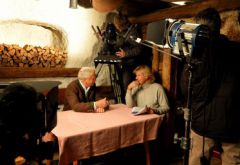