It was a life of extremes: Hanna Reitsch broke all the flying records of the time and became a star of the German propaganda effort. She flew the world's first functioning helicopter, tested the very first supersonic aircraft and helped to develop Hitler's secret weapons. She hoped to decide the outcome of the war using kamikaze pilots.

On 26. April 1945, Hanna Reitsch embarked on the flight of her life: through the artillery of the Russian forces into the centre of beleaguered Berlin, to Hitler's Führerbunker. She would subsequently never shake off her reputation as a Nazi pilot. 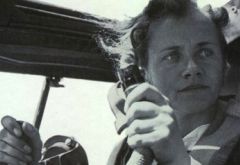