Two professional chefs have been adding new spice to the cooking studio since January 2008. Rustling up new dishes under the motto “East Meets West" or, in Austrian, “Vienna Greets Tyrol", show newcomers Andreas Wojta and Alexander Fankhauser share a kitchen and guide viewers through the programme.

The contrast between the two will make for new thrills in the revamped kitchen. From Mondays to Thursdays they each prepare a dish that reflects their own style and requests from the audience, and on Fridays they team up to put together a three-course meal.

Apart from kitchen basics, Andi & Alex fire off plenty of tips and tricks from the world of top chefs. Another fixed element of the show is the prize question drawn from the subject of the day. 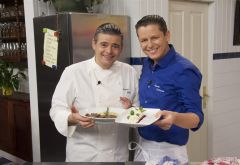