The unusual "express train" of the title travels on land, through the air and underwater, and is steered by Thomas Brezina and Kati Bellowitsch. Every journey is an exciting trip, during which the presenters reveal fascinating information about nature, animals, technology, physics, chemistry and history. Each week, the show consists of a mixture of interesting reports, amazing experiments and easy-to-understand explanations. Thomas and Kati even perform experiments themselves, so that children can try them at home.

All aboard for the exciting journey in the Forscherexpress!

"Forscherexpress" is produced by Interspot Film. In 2004, Thomas Brezina received the viewer's choice Romy award for the format. In 2005, the show was awarded platinum in the "TV-Special Family/Children" category at the WorldFest in Houston, Texas. The WorldFest is a festival for independent filmmakers  established to honour exceptional creativity in the fields of film and video. 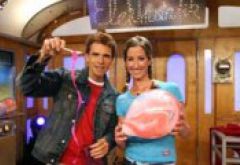