In „Aldo Sohm‘s Austrian Wine Travels“, the Tyrolean worldchampion sommelier and neo-New Yorker returns to Austria to visit winemakers in his homeland. Interesting insights are given into the approaches of the winemakers in Vienna, Lower Austria, Burgenland and Styria. Visually powerful, philosophical and atmospheric, the show is tailored to an audience interested in culinary arts and provides an overview of Austria as a wine country. Sohm is accompanied on his tour by Canadian wine influencer Jana Kreilein.

Aldo starts his trip in the capital of Austria, with its fascinating history, art, music, architecture and culture. Another thing that makes Vienna so special is the fact that it has the largest wine-producing area of any metropolis, and the city's wine tavern culture is renowned around the world. Many of these taverns are located on the slopes of the Kahlenberg and Nussberg mountains. This is where Aldo and Jana meet the winemaker Fritz Wieninger.

Vienna is also famous for its great food. Aldo Sohm visits the family restaurant Mraz & Sohn, which offers one of the most innovative, creative and unusual fine-dining experiences in the city and has been awarded two Michelin stars.

Lower Austria is Austria's largest wine growing region and offers a wide variety of wines, from fresh whites like Grüner Veltliner, Chardonnay and Riesling to fruity reds like Pinot Noir and St. Laurent.  The trip starts in the Thermenregion in the southern part of the state, where Aldo meets winemaker Bernhard Stadlmann. He continues on to Dorli Muhr's winery near the former Roman settlement Carnuntum, which marked the border of the Roman Empire from the 1st to the 4th centuries.

Afterwards, Aldo travels to the Kamptal valley in the heart of Lower Austria and visits winemaker Michael Moosbrugger. A boat trip on the Danube then takes him upstream through the romantic Wachau region in the west.

A small culinary stopover at Landhaus Bacher to taste Thomas Dorfer's legendary apricot dumplings is followed by a bubbly finish at the estate Ebener-Ebenauer in the Weinviertel.

Aldo meets Armin Tement, who took over the winery from his father and now produces world-class wines. The journey continues through the region's picturesque rolling hills to the Werlitsch winery, where Ewald Tscheppe has spent years developing a new approach to winemaking. His vineyards are farmed completely organically, and his respect and reverence for nature is reflected in the wines he produces. The trip is completed with a visit to the Neumeister winery.

In Austria's youngest and most sun-drenched province, the Burgenland, Aldo makes a stop in a region known to Austrians as "Blaufränkischland". Here, young winemaker Stefan Wellanschitz tests Jana's tractor-driving skills.

From the Wellanschitz winery, Aldo's journey takes him on to Gut Purbach. In 2020, the well-known restaurant guide Gault Millau named owner Max Stiegl Chef of the Year. A visit to the famous tomato grower Stekovics follows.

Then Aldo meets up with Gerhard Kracher, a longtime friend and partner. We learn the peculiarities of Gerhard's sweet wine production. The trip culminates with the "enfant terrible" of the Austrian wine industry – Christian Tschida, who is considered a rebel with an unconventional approach to every aspect of winemaking.

"Aldo Sohm's Austrian Wine Travels" draws to an end with a peaceful, relaxing visit to Lake Neusiedl, a perfect place for both sun seekers and wine enthusiasts.

This is just a taste - to be continued in other countries.

A Production of Interspot Film in cooperation with Österreich Wein. 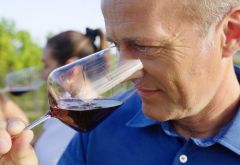