In June 1918, the tragic sinking of its sister ship S.M.S. SZENT ISTVAN signalled the end of the imperial & royal navy and, ultimately, the Austro-Hungarian Monarchy.

The events of that memorable 10th June 1918 are at the centre of this documentary. The Austrian dreadnought S.M.S. SZENT ISTVAN, built in a blaze of scandals and put to sea for its first mission just off the coast of Croatia, met its fate in form of an Italian torpedo boat. A single hit sank the proud and seemingly invulnerable capital ship of the Austro-Hungarian navy, before it even had a chance to engage in battle.

Invaluable archive stock, supplemented by reenactments, a diving expedition to the wreck and 3D animation elucidate the tragedy and highlight the political and social conditions prevailing in the last months of the First World War. The fate that befell the SZENT ISTVAN anticipated and thus symbolised the breakup of the Austro-Hungarian Monarchy.

Interspot Film and Vidicom with ARTE, ORF, ZDF and BMUKK in co-operation with DocLab and MTV, funded by Fernsehfonds Austria and Media Plus Programm of the Europäischen Union. 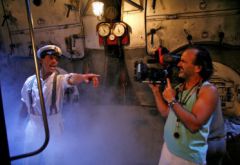