Dear Family- The next Gerneration

Production Overview
The classic ORF ad-lib programme is back: The last scene of the original soap was shot on 18 December 1993, but 14 years later the next generation of Lafites returns to the box. ORF 1 slated the impromptu comedy show on Thursdays at 9:05 pm until the end of August 2007.

Once a month, actors and actresses Sigrid Hauser (playing mother Sigrid Lafite), Herbert Steinböck (father Herbert Lafite) and Gerald Votava (housekeeper Mrs Sokol) had to prove their talent for improvising: the series is not encumbered with any detailed script, fixed dialogues or concrete storyline.

For each episode the cast was given a specific task just before entering the recording studio – such as planning a wedding anniversary or a joint holiday trip, and they had to come to terms with that challenge in the time available for the slot. The problem was that guests were constantly popping up who were hell-bent on wrecking the family's plans. The strategies to be used were assigned to each guest by Oliver Baier on an ad-hoc basis just before their appearance.
Robert Palfrader was a constituent component of the new comedy format: acting as a joker he took up a great range of roles varying with each episode.

As an added bonus, the Lafites could repeatedly welcome stars from the Austrian cabaret and comedy scene in their home.

Dear Family – The Next Generation was developed jointly by Oliver Baier, host of “Was gibt es Neues", and Sandra Winkler, head of the ORF comedy department. The impromptu comedy series was produced by Interspot Film GmbH. 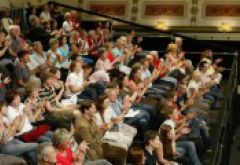