The documentary Atatürk - The Father of Modern Turkey attempts to come to terms with Mustafa Kemal Atatürk as both a larger-than-life personality and a phenomenon of the zeitgeist at the turn of the last century. Atatürk’s revolution reflected the tensions between tradition, affairs of state and religion prevalent at the time. He was a man driven by the ideals he was prepared to implement at any cost, and his reforms completely changed the face of Turkey.

Was the “Father of the Turks” a European at heart? He was inspired by the idea of nationalism, the implementation of fundamental rights and the separation of state and religion. His countless private notes, diaries, and the handwritten comments he added to his books offer us a behind-the-scenes look at the most powerful man at the dawn of the Turkish Republic, as well as insights into his personality. November 10, 2018, will mark the 80th anniversary of the death of Atatürk, undoubtedly one of the most fascinating figures of his time.

He was a brilliant military strategist and political operator, the founder of modern Turkey, a ladies’ man, and an educator of the people. In addition, he was a revolutionary profoundly influenced by Western ideas. His private library contained the most significant works of the European Enlightenment.

Without his “War of Independence” there would be no Turkey. This has earned him lasting fame and admiration among many Turkish people to this day.

The film is a portrait of Atatürk and his intellectual development in an era that looked ahead to the welfare of the European nation-state and its secularism, rather than backward to the Ottoman Empire. This was an outlook that, due to either unfulfilled expectations or the waning of Europe as a desirable model, faded for those who came after Atatürk.

Questions as to who Atatürk was and to what degree his concept of the state was derived from European ideas naturally lead to questions regarding present-day problems in Turkey and the roots of those issues in Atatürk’s revolution and political innovations.

A film about Atatürk produced outside of Turkey will necessarily approach the topic from the point of view of Europe as a whole. Considering his biography and his philosophy, this is not difficult. European influences on Atatürk can hardly be overlooked: they come from France, Germany, Austria and Switzerland. As an enemy in the First World War, England would become an opponent of the Ottoman Empire and represented a danger to its quest for freedom. Russia would be the first nation to support the new republic. Bulgaria, where Atatürk was stationed as a military attaché before the First World War, was part of the Ottoman Empire until the end of the 19th century and in Bohemia, or more precisely, in Karlovy Vary, Atatürk received medical treatment in 1918. Considering this history, questions arise towards the end of the film regarding Europe’s waning influence and the tendency for countries such as Turkey to increasingly turn eastward.

Along with interviews with historians, a rich trove of archival footage and photographs will enhance the documentary. These will be further illuminated by reenactments depicting the intellectual evolution of Atatürk the man, as well as his revolution and political philosophy. Inner monologues drawn from the wide range of the nation’s founder’s writings and diaries, notes and letters will lend authenticity and credibility to the film. 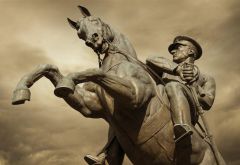