Acclaimed Austrian artist André Heller is reviving a centuries-old tradition of hosting house concerts in his large apartment in a quaint living room in Vienna's inner city. This documentary series presents a wide variety of national and international artists, introducing the musicians and their work and then accompanying them during the rehearsal process and the performance itself.

The series is now in its third season and continues to amaze audiences with its high production values, creativity, virtuosity and state-of-the-art technology. Exceptional audio quality and six modern film cameras ensure that the programme itself is as captivating as the musical performance and the art-filled surroundings. Each episode is an intimate, stand-alone documentary that is part of a greater whole.

The third season is currently in production.

The documentary series is a co-production of ORF III and Interspot Film, and is funded by the Austrian Television Fund, the Vienna Film Fund and Lower Austria. It provides a fascinating and visceral insight into the art and process of modern-day musicians. 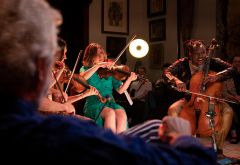