Since childhood, Archduke Maximilian, brother of Emperor Franz Josef I., has wished for nothing more than to emerge from his sibling‘s shadow. His dream finally comes true when he becomes Emperor of Mexico. However, the dream unexpectedly and rapidly becomes a nightmare: Maximilian believes he is welcome in Mexico, but the opposite is the case. He is finally captured by his adversary, Benito Juarez, and sentenced to death. Maximilian‘s dreams of becoming a glorious ruler die with him, cut down by a firing squad.
To mark the 150. anniversary of Maximilian‘s ascent to the throne in 2014, the documentary will
examine the fate of the contradictory and complex Habsburg and investigate the circumstances that led to his tragic failure from various perspectives.

Style and Format
The story is told in the style of a historical docu-drama. Maximilian‘s tragic failures are illuminated using re-enactments on original locations in Mexico, Italy, Austria, Belgium, France, archive materials and original documents. Historians from Austria, Mexico and France will present their polarising viewpoints in interviews sequences. Also George Habsburg, the present second-born Habsburger, has confirmed participation. Additional original quotations from letters and journal entries as well as vivid descriptions of the circumstances by experts further add to the comprehensive picture of Maximilian´s personality – from his rise to his fall. For the documentary, the authors are able to take advantage of the most recent research. At team of historians and exhibitors spent two years researching Maximilian´s life and works for the exhibition that opened in Vienna´s Hofmobiliendepot in 2013.

A Classic Tragedy
Emperor Maximilian‘s biography reads like a conventional Greek tragedy: for years, he is driven by rivalry with his brother and the urge to prove his greater worth as a ruler. His wife, Charlotte, similarly feels she is destined for greatness. The precarious situation in Mexico acts as a catalyst for a great fall - an outcome that is almost preordained. There is always the hope that the problems will be resolved, but events continue to conspire against Maximilian – until disaster strikes.

HISTORICAL FIGURES
The Protagonist
Ferdinand Maximilian of Habsburg inhabits a world somewhere between fantasy and reality, even before he becomes Emperor of Mexico. As emperor, he is initially both ambitious and progressive, but later his rule becomes surreal. His inability to make decisions in difficult situations and his lack of awareness are characteristic of Maximilian. Too late, he realizes he has been used as a pawn by the colonial powers France, England, Spain and the U.S.A., a victim of nineteenth century colonial politics. From today‘s perspective, his emotionally unstable personality is a major contributor to the tragedy that befalls him.

His wife
Charlotte of Belgium, his beautiful and ambitious wife, is the driving force behind the decision to assume the Mexican crown. She manages the business of governance while Maximilian concentrates on developing a personal relationship with the population - as does his adversary. When the French withdraw from Mexico, Charlotte continues to cling to an empire that has all but ceased to exist. Her tragic failure results in a mental illness she will never recover from.

The Brother
Kaiser Franz Joseph I. Emperor Franz Josef I takes advantage of the offer of the Mexican crown to have Maximilian sign a document renouncing any claims to his throne, finally removing
his annoying critic and rival for good. The two brothers have always differed on political issues.

The Manipulator
Napoleon III. recruits Maximilian for Mexico‘s throne, neglecting to mention that his troops only control a mere seventh of the country. When pressure from the U.S.A. increases at the end of 1866 Napoleon is forced to withdraw his troops.
He advises Maximilian to abdicate and leave Mexico. When Maximilian refuses, Napoleon withdraws all of his support. 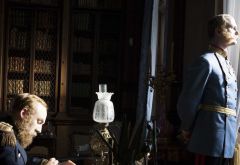