In a merciless desolate furnace - an unexpected predator survives.
With exceptional surviving skills lions roam the Namib Desert! On the brink of extinction, their future is at risk, and now a brotherhood of five young lions holds the key to the future of their kind. Two years ago an old queen and her two daughters gave birth to a total of five male cubs and despite the hardships of the desert they have managed to raise them successfully. But soon the time will come for the ‘Five Musketeers’ to continue life on their own, when their mothers begin their search for one of the last remaining adult male lions. Faced with many unforeseen challenges the five young males need to conquer the oldest desert on earth on their epic journey to adulthood.
The pride is headed by an old queen who, at an age of nearly 17 years, is the oldest lioness alive in this epic wilderness. She teaches the five young brothers how to hunt, how to survive and how to rule a kingdom of sand, sun and dust. But when the seasons change, life in the desert becomes ever more relentless and inevitably takes its toll. The old, brave lioness dies after a spectacular attempt to kill a giraffe.
Rain in the desert is extremely rare, but when it does happen greenery explodes all over albeit short-lived. For prey species such as giraffe, springbuck and oryx it’s paradise. But as they spread out far and wide across the vast desert, paradoxically in these times of plenty the pride will have to overcome an extremely steep learning curve: It’s not drought that presents danger, but the unexpected rains, when finding food will be a gigantic challenge to ultimately avoid starvation.
In this 1-hour HD special we discover an extraordinary predator in one of the most remote wilderness areas in the world. Now for the first time ever in this extreme and epic landscape, we can observe, over an extended period, the secret lives of true desert lions. They roam the rugged mountains, the majestic sand dunes, the endless gravel plains and legend has it they prowl the beaches of the Skeleton Coast. With the help of lion researcher Dr. Philip Stander and sophisticated satellite tracking technology we will get the unique opportunity to witness the natural behaviour of one of the rarest kinds of lion. His lifelong devotion reveals an epic journey of hardship and triumph.
The blue chip style of the film will not be affected by the few and short appearances of the scientist who has collared all the lions for their own sake. He is aware that faced with the already ruthless elements of the desert there are even more dangers on the horizon: local villagers, poachers and hunters pose a threat to the survival of the population. And once the lions attack cattle the herders will unhesitatingly kill them. Philip Stander’s research over the past 17 years indicates that now more than ever our Five Musketeers’ survival is crucial. Without adult male lions, prides will fall apart and desert lions will vanish before our very own eyes…
Following the lives of the ‘Five Musketeers’ we will find ourselves in an extraordinary story about the true survival spirit of a unique predator. In a world scorched by a relentless sun and blistering dust storms, the five young lions will face unexpected challenges – and those of them who succeed will keep the keys of survival for a species threatened by extinction.
The desolate, merciless desert holds many secrets, and one of the greatest is about to be revealed – the fascinating lives of true desert kings. This is a film about the natural behaviour of rare desert-adapted lions. The film will focus on the lions and their way of life in the desert and shows their interactions within the pride, as well as with other desert-adapted species. It’s an intimate and personal story of lions that play a crucial role for the survival of their population. It is a story about the power of a pride, a story about family bonds, adventure and - survival.
Filmed in a cinematic style, the visuals of the film will engross the viewer in an undiscovered world. Combined with advanced aerial filming using both Cineflex and drones we will showcase the contrasting landscapes of the Namib by following the ‘Five Musketeers’. With them we will experience choking sand storms, flash floods down ancient dry riverbeds, severe heat and surprising summer blooms.
Coproduced by BoksDocs, Interspot Film and Into Nature Production for ORF Universum, Smithsonian and Arte, distributed by ORF-Enterprise. 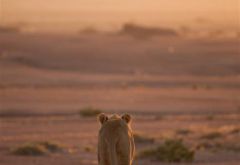