Production Overview
Compared to its fellow summits in the Alps, the Oetscher is not very high: in fact, less than 2000 metres. But among the gentler slopes of western Lower Austria, it really is a giant, with shoulders broad enough to carry the last of the Alps’ virgin forests, the country’s coldest plateau where temperatures fall to –50°, the oldest trees in all of Austria, and her very own Grand Canyon, the “Tormäuer”.
On a clear day, you can see a third of the entire country from its peak, but nights are pitch dark on mount Oetscher except for myriad stars; human settlements are scarce here. It has never been easy to wrest arable land from the giant’s rugged slopes – felling timber on its steep sides is an almost superhuman task, and winters are long and harsh.
Yet in making access difficult for human settlers, the Gentle Giant has succeeded in protecting its primary fauna: the capercaillie – rare in other parts of Europe – still makes its home in the ancient coniferous forests, while snow grouse roam above the tree-line. Hawks lie in wait, while otters hunt in brooks. Ousted from everywhere else in Austria, even the brown bear found refuge on the Oetscher’s mountainsides. 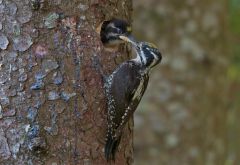