Land of the Champions

"Universum" presents a documentary that reveals the way humans have cultivated parts of the spectacular natural landscape to create a man-made environment that lives alongside and with the wild nature: the traditional mountain farming methods have contributed to the diversity of this region, and mining shaped the people of the area and caused them to become pioneers of cable car technology. People have obviously always felt comfortable here, and Schladming remains the doorway to a wealth of spectacular experiences in the Alps. This Universum documentary is a film about a unique natural region which humans have adapted to - and that has adapted to humans. Schladming is not just home to world-class ski pistes and wonderful winter sport opportunities, it is also among the most beautiful and diverse natural environments in the Alps.

A co-production of Interspot Film and the ORF in association with the ORF Styrian Regional Studio, funded by Cinestyria and Fensehfonds Austria. 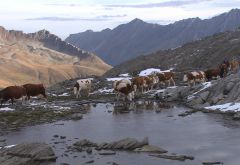