Production Overview
The Gladiator School
Nowhere is the glory, cruelty and tragedy of the Roman Empire as evident as in the gladiator battles that took place in the empire's arenas.

A victorious gladiator reaped the rewards for years of training. They were trained as killing machines in special schools in which they learned to fight, often to the death.

Speculation continues as to how the gladiators were trained to fight, how they lived between the battles in the arena, what status they enjoyed in the society of the Roman Empire and how they met their deaths.

Historic documents and fragmentary archaeological discoveries had long established the existence of gladiator schools, but detailed knowledge about them remained incomplete. Now, a sensational find suddenly sheds light on these myths of Roman history. An entire gladiator school was discovered in Austria, complete with cells, animal cages, a training arena and an adjacent gladiator cemetery. It is the first discovery of its kind. The inmates of the Carnuntum gladiator school were the most the dangerous men of the time: battle-hardened killers with nothing to lose. And yet, there were other sides to the lives of the gladiators: luxury, respect – even family life. Some of whom were veritable pop-stars.

The Discovery
Over recent years, a team of high-tech experts and archaeologists led by Professor Wolfgang Neubauer of Vienna’s renowned Ludwig Boltzmann Institute has developed technology that has ushered in a new era of archaeology. By combining aerial archaeology with mobile multi-sensor ground scanners and elaborate electronic evaluation tools, Neubauer and his team are able to look below the earth's surface without the need for excavation. Their new method of archaeological prospectation is non-invasive and fast, enabling them to produce detailed 3D maps of complete sunken cities.

Carnuntum is such a site. A border bastion and gateway to the empire, Carnuntum was situated on the southern bank of the Danube. The provincial capital of Pannonia was an international metropolis, an emperor’s residence and a trade and military centre of continental importance. The ruins of two large arenas are still visible today. While scanning the entire ten square kilometres of the sunken city, Wolfgang Neubauer made several sensational discoveries, but the project’s highlight is the gladiator school. The researchers used 3D animation to virtually reconstruct that building complex. Better still: The actual training arena has been physically reconstructed on its original foundations and will be the location for meticulously staged re-enactments in this documentary.

The Reconstruction
The small arena in the school’s inner court was the heart of the gladiator school. This was the training centre, where sparring battles with a variety of weapons took place. This is where eques fought murmillos and thraex fought scissors.

The arena was surrounded by the accommodations and communal areas of the gladiators. These were expansive, fairly luxurious and included bathing areas for regeneration.

The men who knew they were destined to kill each other lived side by side in sixty cells – other were married and lived nearby. Some were captive slaves, others were free to leave and enter the premises. The training hall covered an area of 100 square metres and could be heated. The researchers discovered under-floor heating systems, water pipes and drains. Although training was tough and death was always a possibility –  experts estimate that about one in ten fights ended fatally -- their everyday lives were relatively comfortable, and they had access to many amenities of Roman civilisation.

Lost City of Gladiators
The gladiator school was located in the former Roman imperial residence of Carnuntum, which used to be one of the empire's busiest trade centres and a bulwark against the Germanic barbarians in the north. Carnuntum was located on the important trade routes that connected east and west, north and south. As an imperial and garrison town, Carnuntum was home to many legions sent to fight from England to Syria and from today’s Germany to the Holy Land. Emperor Marcus Aurelius fought his war against the Germanic tribes from here. Carnuntum was the last outpost of Roman civilisation and a major city covering several square kilometres.

To date, no more than two per cent of that area has been excavated. But, based on those excavations that have been made, Carnuntum’s award-winning Archaeological Park boasts several carefully reconstructed buildings which will serve as interior and exterior filming locations for this documentary.

When the Roman Empire collapsed and the legions left, the city was abandoned and never built over – a brilliant and unique opportunity for modern archaeologists. Researchers can study the period as it was. The gladiator school is not the only treasure that was found on the site of the lost city of Carnuntum. Its rich archaeological context enables the film-makers to present a wider look at a Roman metropolis and at Roman life through the lens of the arena. 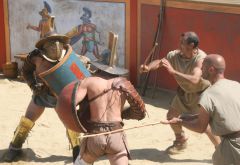