Universum History Charles V - The Emperor and his Mission

“The sun never sets on my empire!” 500 years ago, the 19-year-old Spanish King Carlos I became the German King of the Romans and was shortly thereafter crowned Charles V, Holy Roman Emperor. His vast power was bought with money borrowed from the Fugger family, the loans secured with gold and silver from the Spanish colonies in America. The new emperor had a grand plan: to unify Europe as a great Christian empire, an “El Dorado” built on a unified faith. In faraway Mexico, Conquistador Hernán Cortés soon declared him “Emperor of the World”. But the extermination of the Aztecs and Incas in his name plunged pious Charles into a deep crisis of conscience. His European mission was soon challenged by the Reformation, led by Martin Luther.

The film shows Charles V both as a holy warrior and a humanist, with lavishly enacted scenes and newly rediscovered archival material. He was an emperor willing to enforce his idealistic goals for humanity and his religious convictions by war, financed with gold stolen from the New World. However, the European church eventually split. In the end, Charles V’s El Dorado was doomed by intolerance. The story of his impossible mission is a dramatic Game-of-Thrones-style tale from the early modern age, and a moment in history that mirrors today’s globalised world and its contradictions.

Charles V visited every corner of his empire, undertaking more journeys across Europe than any Holy Roman Emperor before or after him. In addition, he fought more simultaneous wars and battles than any of his predecessors or successors to expand and consolidate his power. Power was a fragile commodity both in the Holy Roman Empire as well as among the Spanish kingdoms. Unlike England and France, these territories were not accustomed to unified rule in the early 16th century and did not identify as an early nation state. The German lords and the leaders of the Spanish plutocracy exercised substantial control as regional sovereigns and elected their own leaders. The young upstart Charles of Burgundy sought to unify both of these realms into one single empire. He was soon called a new Alexander the Great, but he preferred to present himself as the legitimate successor of Emperor Charles the Great and sought to found a new universal empire of Christianity as a response to the increasing power of Islam.

While Charles the Spanish king never visited the Spanish colonies in the New World, he constantly had to fight to keep them. The conquistadores demanded a share in their conquests, and power for themselves. According to Charles, the emperor would bring salvation to the New World, just as Christ had brought salvation to the Old World. The natives therefore had to submit to the faith of the new world emperor – or face brutal violence. This was the mindset of the New World conquerors. Charles himself was plagued by his conscience. It was his deep religious conviction that the natives should be peacefully converted to Christianity and become “free” subjects of his rule, which was based on divine right. But he was in a difficult situation. Charles V needed the treasure stolen from “El Dorado” and the prosperous slave empire of the West Indies to finance his European wars.

Charles is born on 24 February 1500 in Ghent, Flanders as the multicultural descendant of several dynasties. He is the grandson of Maximilian I, the emperor from the chronically indebted House of Habsburg. He is the son of the rich Burgundian Philip I “the Fair” and Joanna of Castile, “the Mad”, heiress of the transatlantic gold empires. Charles is named Duke of Burgundy at the age of 6, and at age 17 becomes the Spanish king. At age 19 he wins an election against the French king, Franz, and is elected German King of the Romans. His ascension to the throne is bought with generous bribes to the German prince-electors. Charles borrows the required capital from the Augsburg banking houses Fugger and Welser. The loans are secured with parts of the colonies won by cruel conquistadors such as Hernán Cortés and Francisco Pizarro.

Charles is described as the “ugly prince from Burgundy“ as he suffers from an underbite, and rumour has it that he is an alcoholic. Nevertheless, he becomes the first universal emperor. In 1521 he meets his most difficult enemy, Martin Luther, at the Diet of Worms. In 1527 Rome is sacked by imperial troops, and in 1530 Charles is crowned emperor in Bologna by the Pope. In 1535 he leads his fleet in the conquest of the Muslim pirate stronghold Tunis. Twelve years later, in 1547, he defeats the armies of the Protestant lords at Mühlberg. In 1552 he suffers a humiliating setback as he is forced to flee Innsbruck to escape his German enemies. This marks the beginning of the end of the great emperor.

We experience the world at the threshold to the modern age, the dawn of the Renaissance and humanism. We witness the emperor, the Pope and Protestants battle for the true faith of Christianity. Charles V is the first ruler to embody a contradiction that has played a major role in world history ever since: on one hand, the global expansion of the European powers in the name of the Christian God and the conquest and subjugation of foreign peoples by means of the cross and the sword, and, on the other hand, the humanist ideal of man’s equal nature and rights, based on the teachings of Jesus Christ.

Charles issues the Leyes Nuevas (“New Laws”) for the protection of the ancient indigenous civilisations of America, showing a humanist side that is absent in his fight against the Lutheran Reformation in Europe. The “New Laws” are essentially the first human rights charter of the modern age. However, as Spanish king, Charles continues to ship gold and silver from the colonies in order to finance his European wars. At the end of his life, he is no more than a tragic figure. Charles abdicates at age 55, having failed in his mission. He is gravely ill, tired and exhausted. During his reign, he has presided over the final schism of the Christian church.
The rule of Charles V is defined by an impossible mission. Resigning, he hands over his royal crowns to his brother Ferdinand in Vienna and his son Philip in Spain. He withdraws to a secluded Spanish cloister in Extremadura, where he seeks to make peace with God and with himself. Charles V dies in 1558. After his death, the question of whether Charles V – friend of Native Americans – and his humanist advisers were in fact secret followers of Martin Luther becomes the subject of an investigation by the Spanish Inquisition.

A Production of Interspot Film for ORF Universum History, ZDF/ARTE. 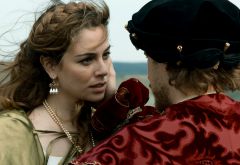