Almost 4000 miles from Moscow, in Russia's Far East, lies the world's richest yet most inhospitable sea. In the winter the sea is covered by pack ice, and in the summer recurring typhoons whip the water into a frenzy. Earthquakes and tsunamis are frequent and one of the many volcanoes may erupt at any time. Despite this, the sea is one of the last great natural regions of the world, home to millions of wild animals, untouched rocky coastlines, thousands of untamed rivers and never-ending primeval forests. Few people in the West have heard of this region - the Sea of Okhotsk, Russia's Wild Sea.

Nature here is defined by extremes and constant change: every few years there is a lack of food and life finds itself on a knife-edge. These periods are followed by years of plenty with millions of cod, salmon and herrings. To the few humans and the innumerable wild animals who inhabit the region, the sea is both hell and paradise.

"Russia's Wild Sea" investigates the fascinating changes the animals have gone through in order to survive in this extreme environment, including fishes that spend hours out of water, bears that eat tiny crustaceans in spring and live off the rivers of salmon in the winter, Siberian tigers which profit from wild animal feeding programs and spotted seals that travel up rivers in order to avoid the feared orcas. The people who live here also provide a wealth of fascinating stories: fishermen who brave the wild sea despite the storms, reindeer breeders who roam the tundra with their herds or rangers who spend months in the wilderness.

Franz Hafner's two-part film takes the audience on a journey of discovery to the farthest corners of the Sea of Okhotsk, presenting it to the wider world for the very first time.

Episode 1, "The Battle for Survival" -explores the challenges of living in an unforgiving environment and examines the adaptations and strategies life has developed in order to survive - something not every life-form is able to do in this frequently inhospitable region.

Episode 2,  "Tides of Plenty" -introduces the years when life is good and there is enough to go around: the sea is filled with millions of salmon, cod and herrings and the forests abound with food. These riches do not last - and can vanish at any moment.

The Interspot film team led by director Franz Hafner worked on this documentary for four years. Approximately 300 days of shooting were required to capture the stunning diversity of the region. 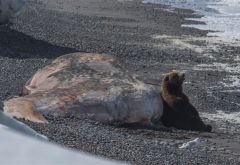