Nature knows no borders and is always on the move: wild animals spread out and colonise newly formed habitats, then retreat when conditions become difficult. They move between summer and winter quarters to escape drought or cold, and seasonal migrations to spawning or breeding grounds are common occurrences.

But, since humans have intensified their exploitation of the planet and laid claim to the entirety of the natural world many traditional migration routes are now interrupted - as a result of human settlements, roads, factories or power plants.

The consequences of human expansion are dire: animal habitats shrink, populations become isolated, their genetic resilience decreases and has resulted in a significant reduction in species diversity.

The gravity of the problem has now been recognised and restoring connections between habitats particularly in the face of a changing climate, has become the most important purpose of conservation efforts.

“Corridors of Life - Europe's boundless Nature“ begins at the Devín Gate, home to one of the European continent‘s most diverse eco-systems.

Ancient migration routes and different flora and fauna zones cross at the point where the Morava and Danube rivers flow into one another and the Carpathian Mountains and the Alps meet the outer edges of the Asian steppes.

The film examines the challenges the animals face in an environment dominated by humans: brown bears from the Balkans attempt to find territories to settle in the southern Alps, red deer from the Carpathians attempt to make their way to the Alps, huchens struggle to reach the spawning grounds located in Danube tributaries and cranes abandon their winter quarters in order to establish new breeding grounds in eastern Germany.

The obstacles the animals face, the consequences of the changing landscape and approaches to resolving these challenges are the central themes of the documentary. The extinction of many different species is a still an ongoing process. This disastrous situation needs to change rapidly - but is there still time to prevent a horrifying decrease in biodiversity?

But there is hope: an important part of the documentation is dedicated to the measures that help to protect and save these animal migrations routes to connect habitats and ensure that animals can and do roam the landscape and waters without obstruction: for example, green and blue belts that span countries, river revitalizations, wildlife bridges, restricted nesting areas or eco-strips in the agricultural landscape. 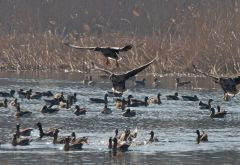