Gerhard Rühm's works are precise and to the point, marked by fine intelligence and black humour. In honour of his 80. birthday on 12. February, the ORF pays tribute to the Austrian artist with a film by Sonja Hochecker. From the very beginning, Gerhard Rühm took no prisoners in his works and in his words. As a founding member of the renowned "Wiener Gruppe", he developed dialect and sound poems that investigated the nature of Viennese language.

The portrait examines his radical beginnings in Vienna's underground and his unknown visual works, montages and chansons. In his younger years he was considered a menace to society, but 50 years later he became the recipient of awards and honours - life is subject to change, as Rühm would be the first to point out.

The documentary accompanies the artist during his everyday existence in Vienna and Cologne and at national and international events, providing perceptive insights into the artist and man Gerhard Rühm .

It reveals an alert, critical and humorous artist who continues to work productively and in a wide range of fields despite being almost 80 years old. 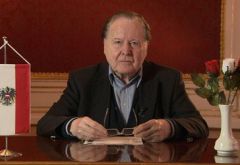