"Mr. Life Ball" Gery Keszler, "Dancing Stars"-juror Nicole Burns-Hansen, "Wild Cooking"-chef Denise Amman and snowboard champion Benjamin Karl face up to their fears, summon up all their courage, and enter a new world: in the 8-part docu-soap "The High Flyers", they attempt to reach new heights and earn their pilot's license.

Their base is the airfield in Stockerau. But will they achieve their dream of flying?

The four contestants have to earn their pilot's wings, and face several hours of theoretical and practical tests. They must collect hours in a single-engine plane, as well as learn all about radio protocols and thermal lift. They have eight weeks to earn their pilot's license. But who will take off to dizzying new heights, and who will be stuck on the ground reading up on signals? 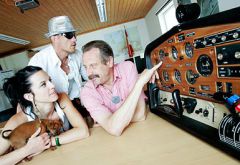